Symptoms, which usually begin four to six days after infection and last for up to 10 days, may include :

Sometimes, symptoms are mild and can be mistaken for those of the flu or another viral infection. Younger children and people who have never had the infection before tend to have milder cases than older children and adults. However, serious problems can develop. These include dengue hemorrhagic fever, a rare complication characterized by high fever, damage to lymph and blood vessels, bleeding from the nose and gums, enlargement of the liver, and failure of the circulatory system. The symptoms may progress to massive bleeding, shock, and death. This is called dengue shock syndrome (DSS).

People with weakened immune systems as well as those with a second or subsequent dengue infection are believed to be at greater risk for developing dengue hemorrhagic fever.

Dengue fever testing is used to determine whether a person with symptoms and recent potential exposure to dengue has been infected. The infection is difficult to diagnose without laboratory tests because symptoms may initially resemble other diseases, such as malaria. Two types of testing are available:

What does the test result mean?

Antibody testing → antibody tests may be reported as positive or negative, or may be reported as an antibody titer with an interpretation of which type(s) of antibody (IgG or IgM) is present. Positive IgM and IgG tests for dengue antibodies detected in an initial blood sample mean that it is likely that the person became infected with dengue virus within recent weeks. If the IgG is positive but the IgM is low or negative, then it is likely that the person had an infection sometime in the past. If the dengue IgG antibody titer increases four-fold or greater (e.g., titer of 1:4 to a titer of 1:64) between an initial sample and one taken 2 to 4 weeks later, then it is likely that a person has had a recent infection. Negative tests for IgM and/or IgG antibodies may mean that the individual tested does not have a dengue infection and symptoms are due to another cause, or that the level of antibody may be too low to measure. The person may still have a dengue infection - it may just be that it is too soon after initial exposure to the virus to produce a detectable level of antibody.
The following table summarizes results that may be seen with antibody testing:

The results in above table can also indicate the progression of disease as shown below. 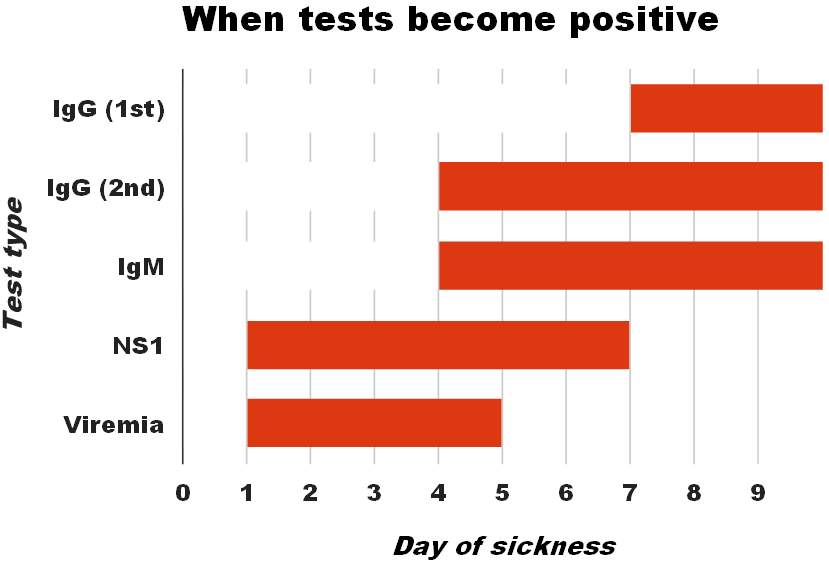 Molecular testing → a PCR test that detects the presence of the virus itself is generally considered the most reliable means of diagnosis, but the test is not widely available. A positive result from a PCR is considered conclusive. A negative result on a PCR test may indicate that no infection is present or that the level of virus is too low to detect, as may happen if the test was performed after the 5-day window during which the virus is present in the sample collected for this test. If very recent exposure is suspected, repeating the test at a later time may be warranted.